At the beginning the sources of the work of SySt Institute in the field of hypnotherapy and the fundamentals of Systemic Structural Constellations are presented. At the same time it deals with the concepts which enable the work in Systemic Structural Constellations generally: transverbal language, semantic reaction and representational perception. The terms are explained in detail, also referring to the basic ideas of NLP, and illustrated using a semantic reaction differentiation. The understanding of Constellation work as a kind of language is deepened. The idea of knowledge existing as a „Knowledge in-between us", is explained. The hypnotherapeutic wording of listening and understanding means to integrate the whole body. The following is an example of the various options of hidden work. Furthermore, the cataleptic hand is presented together with detailed advice on its use. The constellation leads to some advices about the curative use of SySt principles.


Another question is how a projection of oneself into the constellation picture can be done and which are different types of projection.

These statements are supplemented subsequently by the explanation of hypnosystemic aspects of each step of a constellation, for example of the elements of pacing and leading and the possibility of future pace. A definition of trance is given and the advantage of the capacity of simultaneous awareness is shown.

An introduction of two additional constellation grammars - the two-element constellation and the problem-constellation - leads over to general ideas of constellation-grammars and techniques.To this belongs for example a classification of symbols and ways to resolve a problem trance. The seminar continues - combined with practical exercises - with the presentation of the tetralemma and especially with the position of BOTH as a source of new ideas and developments. The 16 subtypes for BOTH are presented and briefly explained.

Using the „linguistic surface structure constellation", changes on internal norms, beliefs, or maps become possible. The presented constellation on this grammar starts with a preliminary solutionfocused interview and includes a demonstration of a self relation work: reintegration of a younger state ("alter-ego") in the present consciousness.

Other examples of constellations follow: Constellation of the hidden theme, body constellation and core-transformation-constellation. The grammars - even in their similarities and differences -- are explained. The background as well as the handling of internal "belief sentences" is discussed. Variations are shown of terms of "good intention". The constellations also give the opportunity to demonstrate and explain various forms of interventions. This includes demonstrations of how context-overlapping functions and how it can be released, even without knowing its meaning or reason. It also involves gestures as language with hypnosystemic elements that offer the possibility of "body-internal" constellation.

More constellations follow, one belonging to the grammar of the „goal-approximation constellation", another belonging to the grammar of „nine-squares constellation", which are associated with a presentation of work with the timeline. The constellations give rise to a further semantic reaction differentiation exercise and to a reference to internal and external reframing. Connections and differences between goal, desired state and miracle are shown. An explanation of the difference between desire and will, according to Wittgenstein, is given including the remark, that the term "as if" can build a bridge between both. The terms "core-belief sentences" and "core-belief principles" are also explained referring to Wittgenstein.

The seminar concludes with another comprehensive comparison of systemic structural constellations and NLP. 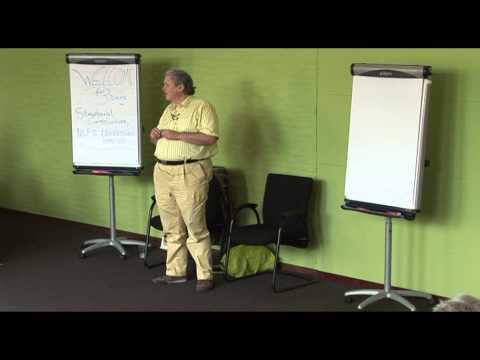 Auszug aus DVD S-0017 - Bezug über www.systmedia.de At the beginning the sources of the work of SySt Institute in the field of hypnotherapy and the fu...